Droopy eyelids, also known as ptosis, is a medical issue that can develop as part of the natural ageing process, or a congenital one if a person is born with it. Ptosis can occur in a singular eye, or both eyes. Symptoms of ptosis include eye strain, aching eyebrows, interrupting of the field of vision, difficulty keeping the eyes open and fatigue, along with cosmetic concerns.

People who only have mild ptosis may not require any sort of treatment. However, in cases where the drooping is causing problems, such as interfering with a person’s vision, ptosis surgery may be the best course of action.

There are several benefits to undergoing ptosis treatment, including an improvement to your vision, better eye symmetry and the relief of eye strain or eyebrow ache.

Ptosis surgery is life-changing for many and can greatly improve the way you look and feel about yourself.

There are two types of ptosis: acquired ptosis and congenital ptosis. Most people with ptosis will have the latter type, which commonly occurs in older patients as a result of age, the long-term wearing of contact lenses, eye trauma, and cataract or other eye surgeries. All of these can cause the upper eyelid tendon to stretch, resulting in eyelid droopiness.

In some patients, ptosis is present from birth – this type is known as congenital ptosis and is caused by a defect of the upper eyelid muscle. Some small children may have what is known as Marcus Gunn ‘jaw winking’ ptosis, which generally affects only one eyelid and happens when, as the jaw opens, the eyelid rises. This occurs where there is an abnormal connection of the nerves.

In very rare cases, ptosis may occur as a result of a condition that weakens the eyelid muscles, for example, myasthenia gravis or myotonic dystrophy, which can lead to paralysis of the nerves that supply the eyelid. This is a type of stroke, referred to as third nerve palsy.

Eyelid droopiness may also occur where swelling or large cysts weigh down the lids.

How is ptosis surgery performed?

For adult patients undergoing surgery for ptosis, the treatment typically involves the shortening of the muscles (tendons) which raise the eyelid. Once shortened, the muscle (tendon) is then reattached to the eyelid using sutures (stitches). These sutures are kept hidden beneath the skin.

The stitches on the eyelid skin may be somewhat visible for one week after the surgery, after which they are usually removed.

Brow lift surgery may be carried out in conjunction with ptosis surgery so as to improve the cosmetic result.

Treatment is required for moderate to severe ptosis in children who are born with the condition. Correcting the problem in childhood will allow the child to develop normal vision, which is important, as when ptosis is left untreated, it can lead to the development of a lazy eye condition, known as amblyopia. This condition occurs when there is a lack of normal eye development during the early stages of childhood, causing poor vision long-term.

Childhood ptosis can be treated with surgery, however, there are some rare disorders that may be fixed using medication. At Clinica, consultation and comprehensive assessment will be carried out by a paediatric ophthalmologist, who can determine if the child needs to have surgery.

If surgery is necessary, it will be carried out under general anaesthetic. The typical method used is to tighten the levators, which are the muscles that lift the eyelid. In children with very severe ptosis, the levator is extremely weak. This means that the lid may be suspended from under the child’s eyebrow so that the forehead muscles can do the lifting.

For small children with Marcus Gunn ‘jaw-winking’ ptosis, surgery may be necessary, but operating on one eyelid can cause the other eyelid to droop. As such, performing the surgery on both eyelids may be recommended. 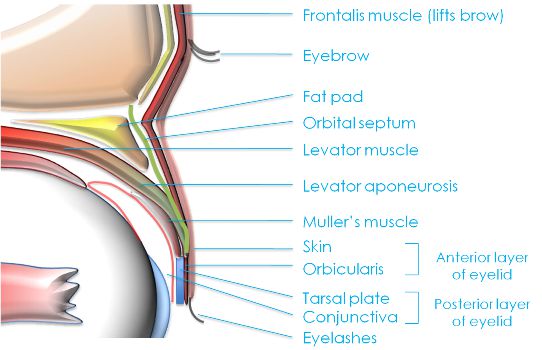 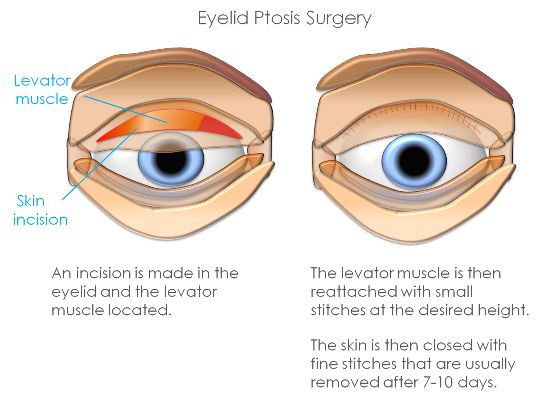 How do I prepare for the procedure?

During a consultation, the surgeon will ask you about your medical history, any medication you are taking and examine your eyes, including the extent of your eyelid droopiness and your vision. Patients, particularly children, will undergo several tests to measure eye movements (this is called an orthopic assessment), checking for other issues. The surgeon will also take other measurements, such as weight and height, and may take a blood test.

If you are overweight or pregnant, you may be asked to delay undergoing the surgery until it is safe for you to do so. The surgeon might take some pre-operative photographs too.

If, after an in-depth consultation, it has been determined that you are a suitable candidate for ptosis surgery, you will be invited to book your procedure. Once a date is set, you will be asked to prepare for the procedure beforehand.

Smokers will need to stop smoking for at least six weeks before the surgery, as there is a higher risk of complications and it can slow down the healing process. If you are taking Aspirin-containing medication or other NSAIDs, like Ibuprofen, which thins the blood, you must stop doing so for two weeks prior to the surgery, as it can increase bleeding during and post-surgery.

For patients undergoing ptosis surgery under general anaesthetic or local anaesthetic with sedation, you must not eat or drink for at least six hours prior.

Before going into the operating theatre, a nurse will carry out any vital pre-surgery checks, like your blood pressure. You will then meet with the anaesthetist and your surgeon, who will mark you up.

As an anaesthetic is injected into the eyelid area, you will not feel pain during the procedure. For adult patients who are awake and under local anaesthetic, a pulling sensation may be noticeable.

After the procedure, you are likely to be in a little pain and discomfort for the first couple of days, but this is nothing that normal paracetamol cannot remedy.

What happens during the recovery period?

Following surgery, a padded dressing is placed over the eye area and should be left on for the first 24 hours in order to reduce the swelling. This eye pad can be removed by yourself at home the day after surgery. Sutures will either dissolve or be removed in the clinic about 1-2 weeks after the procedure.

A nurse will clean around the eye area before you leave the clinic and you will be prescribed eye drops or ointment, along with instructions on how to properly clean the area. When cleaning, refrain from rubbing the eyes.

If you are in pain or discomfort, ice packs can help to reduce the swelling. You may also wish to take over-the-counter painkillers.

It is important to keep the areas as dry as possible for the first 7-10 days. Showering is fine, but you should try to avoid contact between the eyes and the water. Swimming should be avoided for two weeks post-surgery, as should applying eye make-up.

Will I need time off work?

Some patients may wish to have a few days off from work after ptosis treatment, but this depends on how they feel and is to be judged individually. Generally, we advise having a couple of days rest and absolutely refraining from strenuous activities, such as heavy lifting or exercising.

Are there any risks to ptosis surgery?

Though unlikely, any surgical procedure has its risks, but at Clinica, you are in safe hands. We will discuss all the possible side effects or complications with patients during the consultation period. Patients will also be given detailed information in written form, which summarises what has been discussed and ensures the patient consents to the procedure.

Swelling and bruising of the eyelids are common after surgery but normally subsides after a few days. Blurred vision is also common for several days. Infection or bleeding can occur, but this is not so common.

Dry eyes are common after ptosis treatment, which can result in red, sore eyes and a gritty feeling. The eyes are also more prone to infection during this period. As such, your doctor should prescribe you artificial tear drops or ointment, helping to lubricate the eyes and relieve symptoms.

Other potential complications include; eyelids being too low or too high, an irregular curve of the lid, or the upper lid fold being uneven.

How long do the results last?

According to the Moorfields Eye Hospital, around 80-85% of people who have undergone ptosis surgery are correctly treated after one operation. That being said, some people may require further treatment. Droopy eyelids may return at any point in time and may, therefore, need to be addressed again.

How much does ptosis treatment cost?

Prices will depend upon the type of procedure carried out and the individual patient. For ptosis (droopy eyelid) treatment in London at Clinica, prices range from £2900-£4900. Consultation fees are not included.

Please book a consultation for a written quote with a full breakdown of treatment costs.